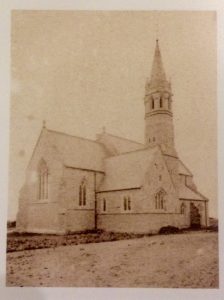 St Mary’s is the Parish Church of Sherburn and was built in 1872 by Austin and Johnson. The Church is Grade 2 listed. It is constructed of squared, rock-faced stone in narrow courses with ashlar dressings and Welsh slate roofs. It has an aisled nave, a chancel with organ chamber and vestry to the north side, and lady chapel to the south, together with a tower and spire in the angle between the vestry and north aisle. The organ, installed in 1874 at a cost of £250, is said to be the earliest existing example built by Harrisons in their Durham works. The 70 foot tower has a square plan lower stage, surmounted by an octagonal bell tower, with trefoil-headed bell openings under linked hood moulds, a parapet with angle, pinnacles and squat spire. And a weather cock. The 3 bay nave has a pointed 3 light window in the diagonally buttressed west end, small paired lancets in the clerestory, a steep roof with coped gables, and a buttressed south aisle, with 3 light windows in both south and north aisles.

The chancel has 2 light windows on the north and south sides, and a 3 light window in the diagonally buttressed east end, together with a steep roof with coped gable. The 2 bay gable fronted organ chamber and vestry has similar roof and windows. The nave has hollow-chamfered pointed arches on octagonal piers, and a chancel arch on foliage corbels, with similar arches to the organ chamber and Lady Chapel. There is a trefoil headed piscina and encaustic tiled sanctuary floor in the chancel. The nave has an arch-braced king-post roof, the chancel a wood barrel-vaulted roof.

The lectern and altar ornaments (cross candlesticks and vase) were provided in 1907, and electric light in 1913, followed by mains water in the early 1920s. The oak reredos bears a dedication to the Reverend Richmond, who died in 1898, the first of three Sherburn vicars who each served the parish for 32 years (the other two being Charles Parkinson, 1905 to 1937, and William Latimer, 1937 to 1969). There is a stone on the north wall of the chancel to the Reverend J. G. Freear Read, who was vicar for only 7 years and died in 1905 at the ge of 47. In the north aisle a window remembers another tragedy, the drowning of James Wearmouth abroad, aged 23, in 1919. The organ became electrically blown in 1920. The present side chapel was formed in 1928, and has a window dedicated to the memory of a 13 year old boy, Henry Smith who died in 1923. In 1953, Mrs. Gibson (daughter of Abraham Wearmouth) brought about the west window, and there are more recent windows in the south aisle dedicated to the memories of William Crawford, and Lewis and Susannah Munro. 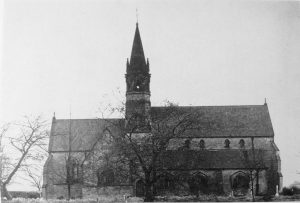 In the early 1990s there was substantial re-ordering with remedial works, including a dais, and the creation of the narthex and other facilities.

References at Durham Record office, the 1972 booklet by Harry Neat (who was vicar for ten years from 1970), and another booklet “The Story of our Village” by Agnes Cowley produced for Sherburn W.I.